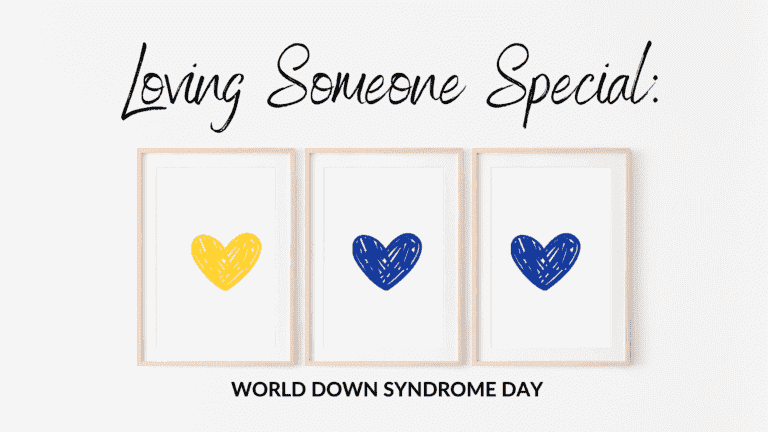 Down Syndrome is a genetic mutation that impacts the 21st chromosome, effectively producing an extra chromosome where there should be only 2. This alteration affects how the body develops and functions. The most common areas affected for individuals with down syndrome are physical differences from a typically developing person, like flat face shape, almond shaped eyes that slant up, short tongue that tends to stick out, and small ears. The IQ of someone with down syndrome is typically lower to moderate, and they have challenges to their speech/language, muscle tone deficits and often have heart defects and vision/hearing impairments. *Learn more about Down Syndrome here.

Today, like many days, I am thinking of my Uncle and I want to share our story.

As a child, regularly being around someone with a disability is many things:  enlightening, scary, confusing, heartwarming, curious, hilarious, and both completely like and unlike any other relationship. I found myself processing him and his diagnosis and figuring out how to relate and understand every time I went. As an adult, it is clear to me that the amount of time spent with him greatly affected my own ability to empathize, connect and embrace people, particularly those who may be considered “atypical”.

My grandmother was young when she had Vince, in her early 20’s, and there was no testing like there is now for Down Syndrome in utero. She inevitably would have learned of his diagnosis at birth at which time she was told he wouldn’t live to be 8 years old. This was her first child, and having married a first generation Italian/American, I imagine having a first child be a son who ended up with a disability was something that affected the family Machisimo greatly. When my Grandfather died young, he left my Grandma to care for Vince alone… for his lifetime.

And she did. He went everywhere she did, so much so that my extended family/friends always thought he was her husband!  They were always together. When they weren’t together, he went to regular school and later worked at programs at the local center for special needs, and participated in the Special Olympics. This is significant given 70-ish years ago the inclusion and resource network for Down Syndrome children and their families was a fraction of what it is today. 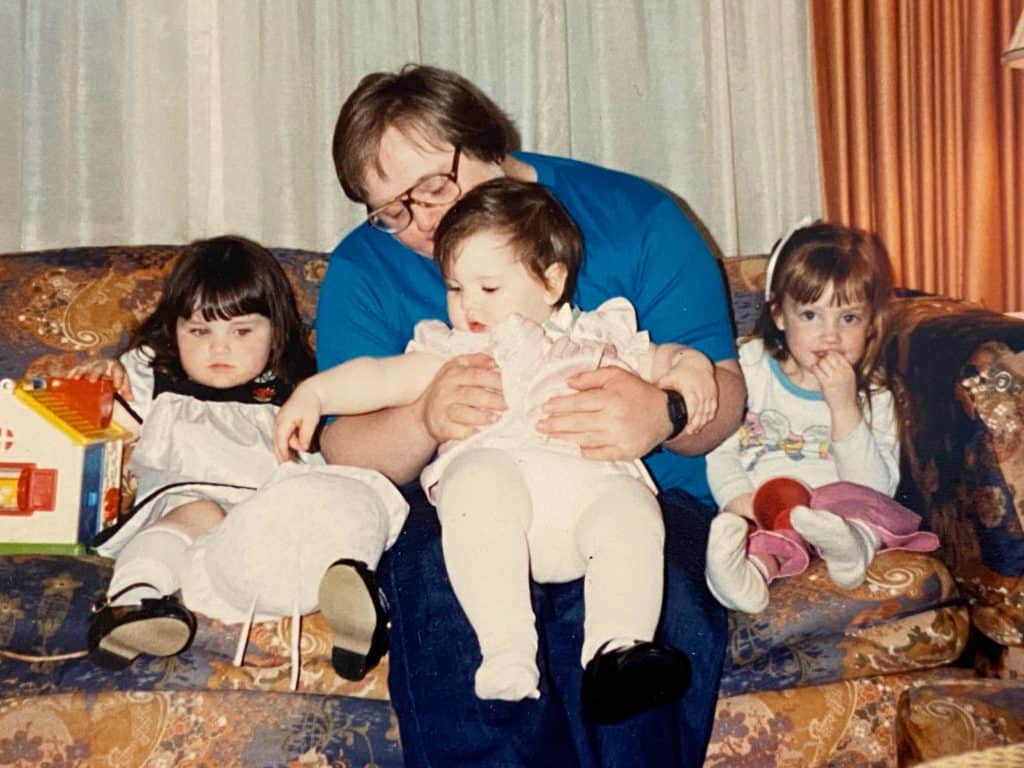 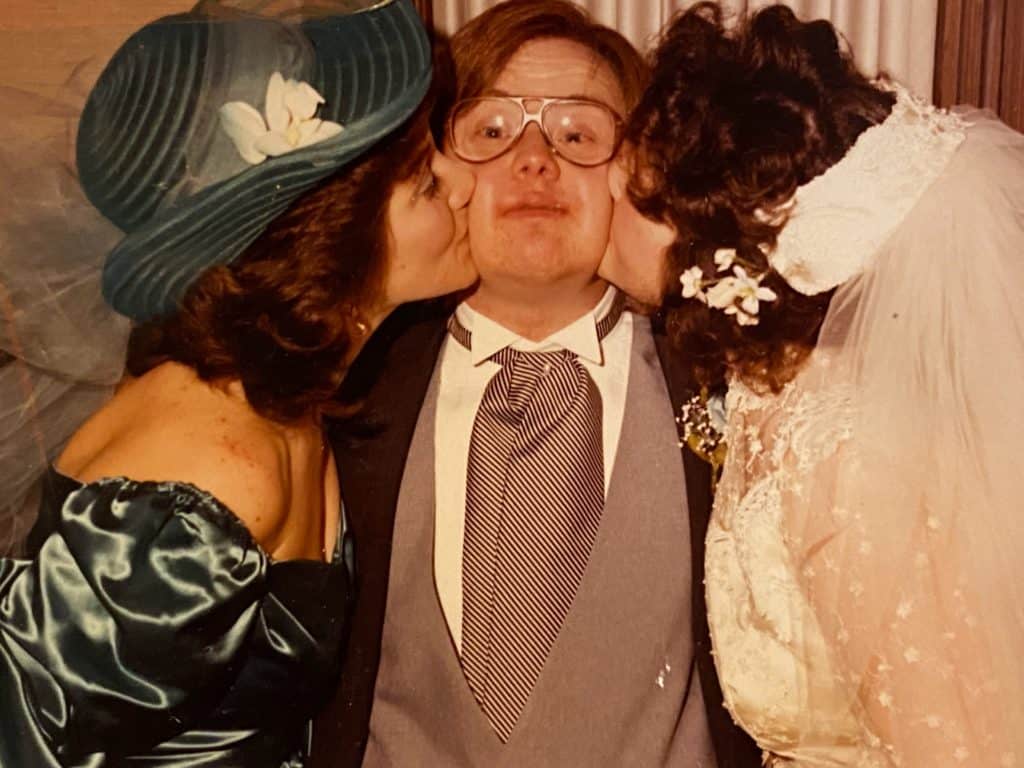 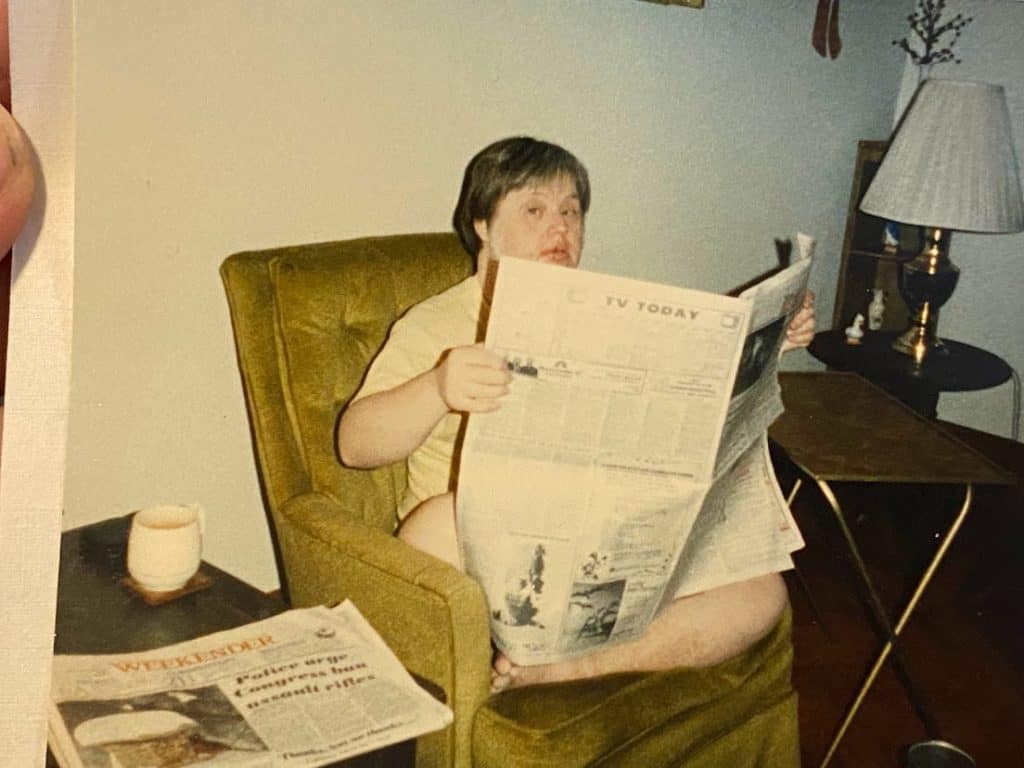 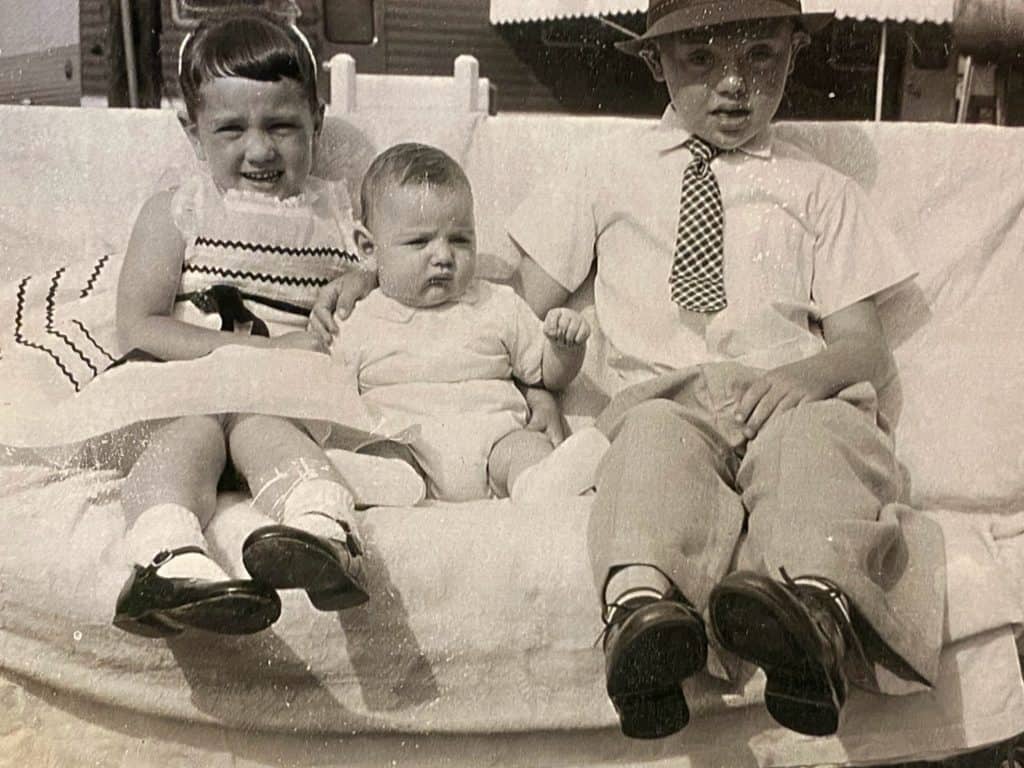 He lived a good, full life and I can say that with confidence.

After losing his mother, he lived between the homes of my mom/dad and my aunt/uncle, his other brother– similar to how a child of divorce would. These years were excessively challenging as he had developed dementia, began having mobility impairments and was grieving the loss of his mother and his home without the cognitive ability and emotional skills to do so.  He also was increasingly unable to safely shower or toilet himself which meant regular care and frequent accidents. My parents even turned our dining room into his bedroom because we didn’t have an accessible bedroom on the first floor and there was no way he could do the stairs, even with support.

The hardest part was that because of his dementia, he was chronically unable to remember that his mother had died. This meant he was always asking to go home, saying his Mom was coming to get him or asking where she was. In his heightened emotional state, he refused care a lot and was irritated easily, meaning for his siblings and their spouses, providing care was deeply challenging and all consuming.

When the care became too much, he moved to a group home for individuals with disabilities where he truly thrived. The staff was incredible with him. While he still did always want to go “home”, he was able to enjoy the things he loved most: Diet Coke, people, yarn, building blocks, ice cream and his evening coffee.

My uncle died at age 65. His legacy has lived long and strong in our family, with those close and far to us regularly sharing stories of how Vince lit up their lives.

My Uncle Vince was a light.

While down syndrome has meant many things for our family through the years, it most often meant laughter.

On his birthdays, which were pretty much national holidays, Vince would sit in front of the room and have a pad and paper where he’d log his gifts. His favorite things to open were yarn, Marshmallows, puffed rice cereal and anything that had to do with Elvis. As much as he loved his own birthday, he also never forgot anyone else’s. He was the one to make sure his loved one got a phone call that day.

He was an Elvis SUPERFAN. My mom, who is a wizard on the sewing machine, made him multiple Elvis suits, which he wore frequently. He’d tell us, “I look like him, I talk like him, and I move just like him!” 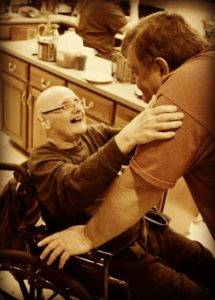 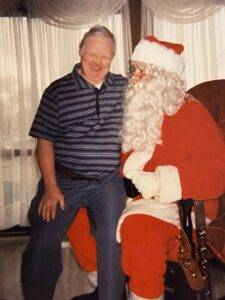 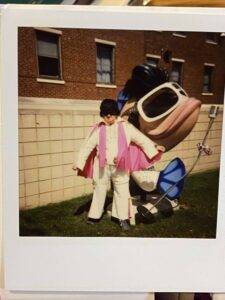 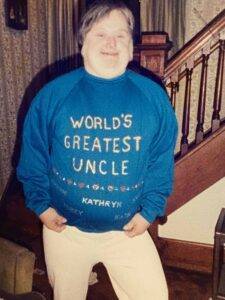 Every evening like clockwork, he’d come out of his room to make coffee for himself and his mom. It’d start off quiet, and as the spoon hit the edge of the cup as he stirred in the milk and sugar, he’d dance. Every time. A spirited little jig in the kitchen that always ended with a sly giggle heard through the house.

He had pet names for all of his nieces and nephews as the 6 of us were his pride and joy. The best nickname was his youngest nephew who was a big ole baby at birth, who he affectionately called “Quarter Pounder” after the sandwich.

He was never more enthusiastic than he was when his Ohio cousins would come for a visit. You’d think he was a celebrity the way he would enter a room when they were there.

Vince was also very challenging. He liked routine and control and didn’t want to be told when to do things, or how. He fought my Grandma every single time she asked him to take care of his hygiene, mainly with showering or grooming. They always fought over the TV because he had to watch what he wanted to watch, and he was hard of hearing so the volume always overrode her programs. He also didn’t have healthy habits with choosing a good balance of foods. She always had to hide the bananas– usually under the couch– because otherwise he would eat an entire bushel in one day.  He struggled with dressing for the weather and would often wear too many layers and we’d fear he’d overheat! But he simply wouldn’t change his clothes once he’d dressed. He was always packing a bag, often putting in it stuff he found around the house that wasn’t his. When the remote was missing, Vince’s duffel bag was always the first place you’d look. He also loved to run the vacuum which was a great help for my Gram. What she didn’t like is how he’d rearrange all her furniture every time he vacuumed. 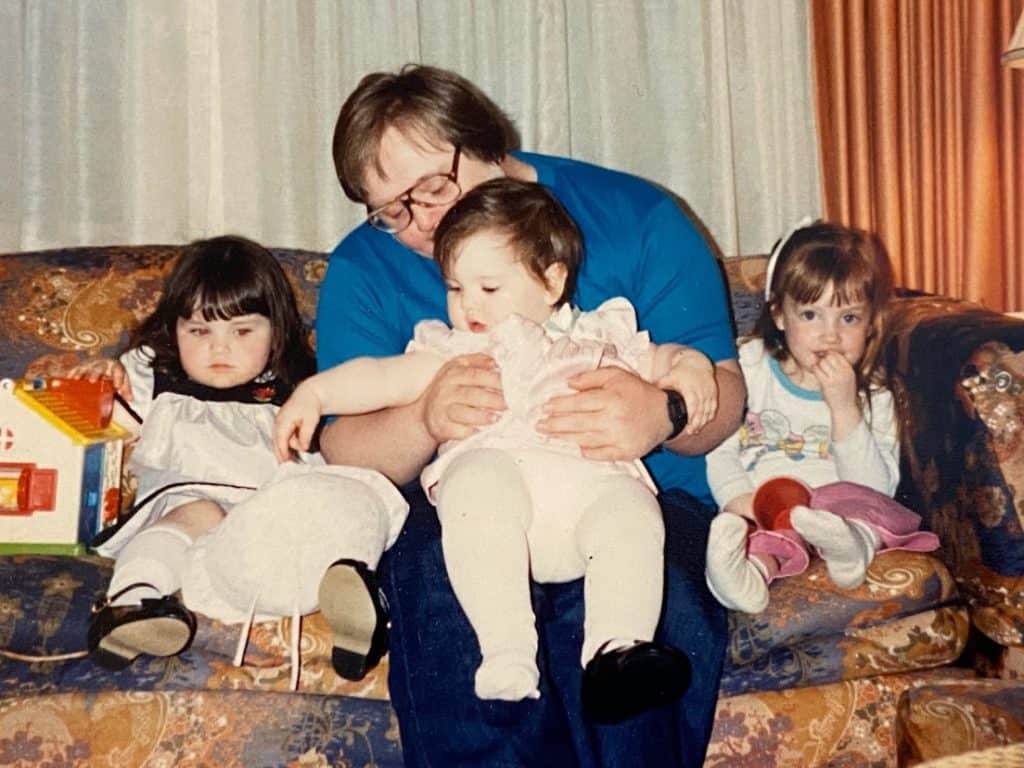 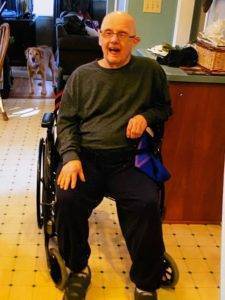 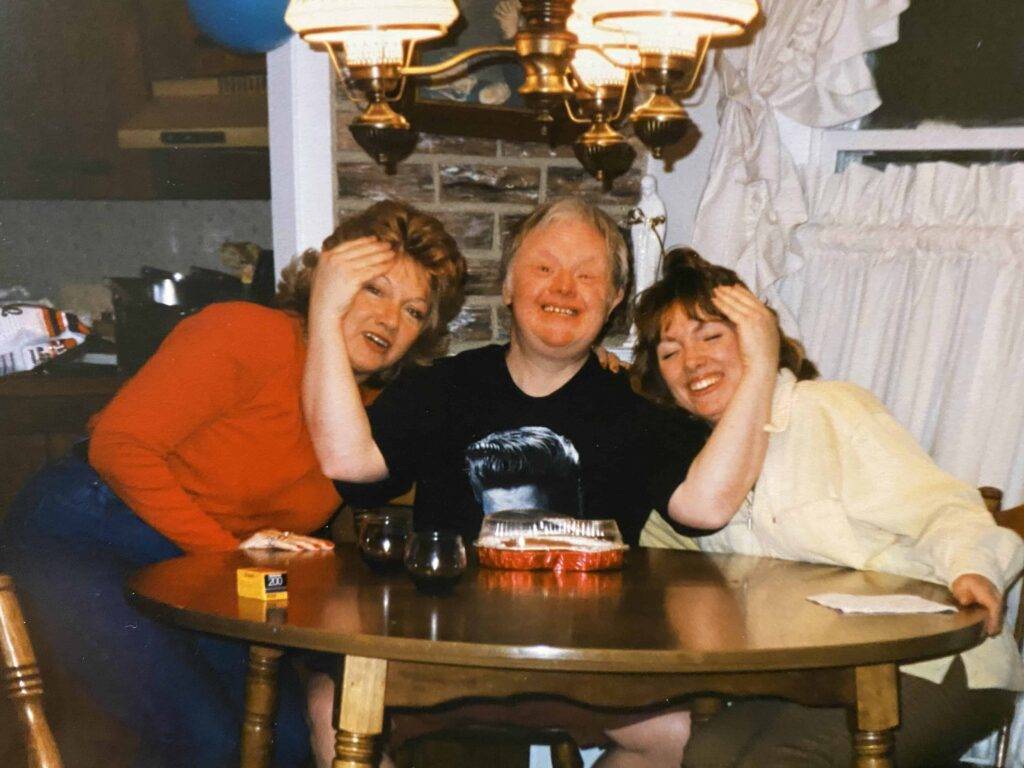 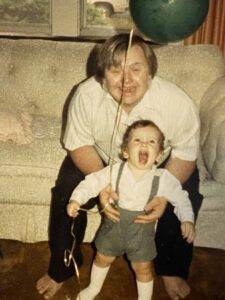 The Vince years were full of intensity, both joy and challenges. What we hold on to the most are the belly laughs and learning from his life that a simple life with love and laughter is a good life, the best life.

My uncle Vince loved his people deeply. He loved hugs and was extremely affectionate. He loved to sing and had a beautiful voice. He laughed with his whole body, and he laughed a lot.

"He lived his life in full color, and as someone who had the pleasure of being loved by him, my life got to be full color too." 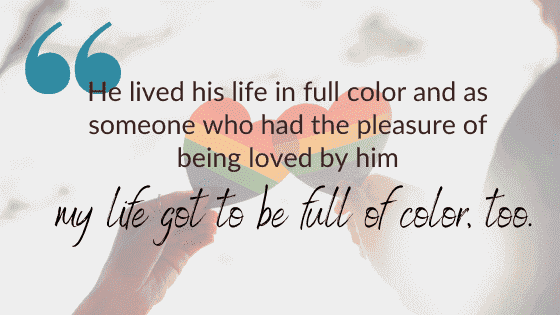